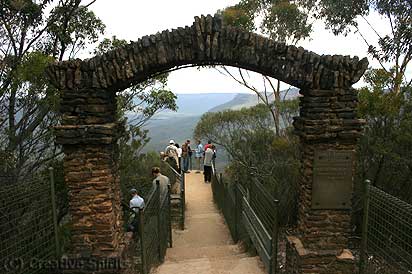 Giant Staircase. This is your last chance to rest. Note the two persons on the left starting to descend.

This walk is hard because the Giant Staircase has 861 steps and it’s very steep and narrow in places. Before you descend the Giant Staircase into the Jamison Valley check the time: The last railway up leaves around 4:50pm. Can you make it in time to the other end?

If your answer is a hearty ‘yes’ you’ll now descend some 300 metres into the Jamison Valley below. About halfway down some pitiful soul has placed a “Half Way” sign to cheer you up.

Take in the steps and remember that their construction commenced in 1901 but did not finish until 1927. Imagine the working conditions at the Giant Staircase when you look down—what an achievement of that time! 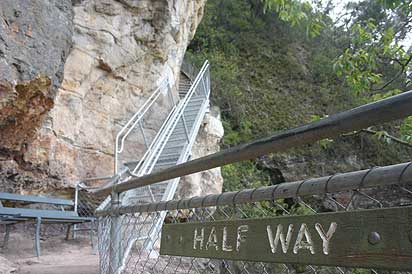 Giant Staircase. And if your fitness is not what you expected it to be, there's an inviting bench half way.

Once down at the bottom things become very easy. Turn right onto the Federal Pass track. The trail leads you almost level through temperate rainforest, then into open dry eucalyptus forest and around some rocks. Take in the atmosphere, especially if you’re walking early or late and not many people are around. Federal Pass. The trail is refreshingly diverse but easy to walk.

The route you’re on is one of the most popular tracks and becomes very crowded on weekends once everyone has finished their breakfast. Signs tell you when you’re directly below the Three Sisters, and another ‘half way’ mark is carved into a stone along the way. Great achievements need encouragement…

Now it’s not that far to the Scenic Railway, the steepest railway in the world. If you’re fit and got time, or when you’re late and there’s no train, take the Furber Steps back up the escarpment.

Tip: If you want to escape the big crowd, don’t take the Scenic Railway back up, do the Furber Steps instead. It’s a hard but rewarding track which offers great views of Katoomba Falls (especially in late afternoon light) and the views towars Mount Solitary and across the valley. 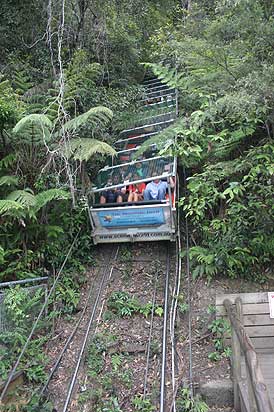 Scenic Railway. The steepest railway in the world makes you hold on tight to your belongings. 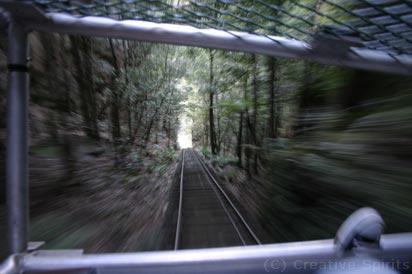 The steepest railway in the world. Prepare yourself for a heart-pumping ride and hold on to your belongings!

Tip: If you don’t want to leave the green wilderness yet, follow the boardwalk which starts at the base of the Scenic Railway. It does a big loop, passes the base station of the Scenicender and has signs explaining early explorer activities.

Once you’re back at the top of the escarpment you can choose if you want to take public transport back to Katoomba town centre or take an hour’s walk back to Echo Point. I suggest the latter, especially if it’s late in the afternoon, because the views are spectacular and the soft sun’s light makes for great photography. 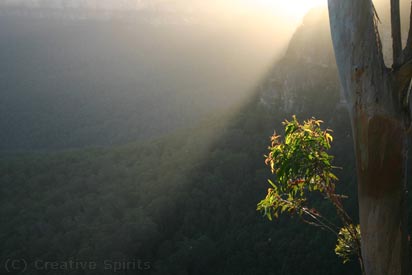 Late afternoon light on your way back to the Three Sisters. Not many walkers take this path and it's a wonderful opportunity to enjoy nature. 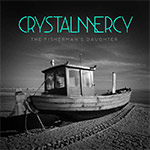 The Fisherman’s Daughter
by Lady Lash 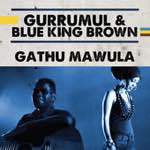