Parramatta’s name is Aboriginal and commonly translated as ‘the place where the eels lie down’ or ‘head of waters’. It comes from the Aboriginal word Baramada or Burramatta. The Burramatta people (Burra meaning place, matta meaning eels) belonged to the Dharug people.

Before the invasion the Darug people lived in this area which was rich in food from the river and forests. There is still a plentitude of eels and other sea creatures attracted to the nutritious saltwater and freshwater mix of the Parramatta River meeting the saltwater of the harbour. The eel has been adopted as the symbol of the Parramatta Eels Rugby League club.

Parramatta is the second oldest settlement in Australia and early settlers were attracted by the fertile soil of this area.

Parramatta Park is a short stroll from the railway station at the corner of Pitt and Macquarie Streets. There are level walking tracks and a children’s playground. Close to the playground you can find some of the last remaining Aboriginal scarred trees. They need to be treated with respect as they are very fragile and an open-air part of Aboriginal history of the Parramatta region. If you’ve taken the ferry from Sydney to Parramatta you have the opportunity to continue walk along the river. The northern walkway shows artworks and has interpretive signs that document Aboriginal history of the Parramatta area.

The ferry station greets you with “Gi walawa and nalawala at Baramada” which means ‘please stop here and rest at Parramatta’. 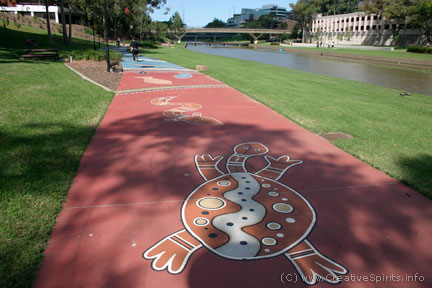 Riverside Walk along Parramatta River. It depicts artwork which tells Aboriginal history from the early beginnings to the invasion. Each colour represents a chapter and interpretive signs explain history.

The name of the garden means ‘calm water’. It is located in Lake Parramatta Reserve, about 6 kilometres north of Parramatta’s railway station, at the beginning of the walking track overlooking Lake Parramatta.

The garden has three sections and contains locally occurring native plants that were used by the Burramatta people for hunting and weaving, bush food or medicine.

Three walking tracks within the reserve allow you to find plants which were significant to Aboriginal people.

A Tree in The Meadow
by Jimmy Little

The Kangaroo and the Porpoise

Kim Scott, who is from south west Western Australia and has mixed Noongar and English heritage, has written a…