The Museum of Sydney (MoS) shows exhibits on Aboriginal culture (Cadigal Place gallery) and features an outdoor sculptural installation. Inside the building is also an Eora video-montage.

Significance of the place

Before you even enter the Museum of Sydney (MoS), note the steel studs and white granite pavers in front of the museum. They outline the site of the first Government House (1788-1846), a symbol of colonisation, invasion and contact. There are displays explaining details of the floor maps outside and in the viewing cube in level 3. 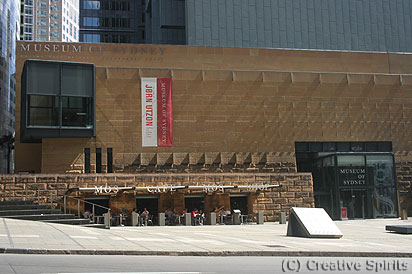 Museum of Sydney (MOS). Note the white pavers on the footpath which outline the first Government House.

For a long time, the site of the first Government House was forgotten and buried under a car park (1960s). It was not before an archaeological dig in 1983 which revealed its remains that this site was acknowledged again. This place now houses the oldest remains of British settlement in Australia.

It was to here that Arabanoo, Bennelong and Colebee were brought after their capture to be trained as go-betweens.

Edge of the Trees sculpture

Several poles made from wood, stone and steel form the Edge of the Trees sculpture, located to the right of the museum in the forecourt. This installation by Janet Laurence and Fiona Foley symbolises the first encounter of Aboriginal people with the white invaders.

Some poles “speak” to you - listen carefully and you’ll hear Aboriginal and First Fleeter’s names. A nearby plaque explains the sculpture. 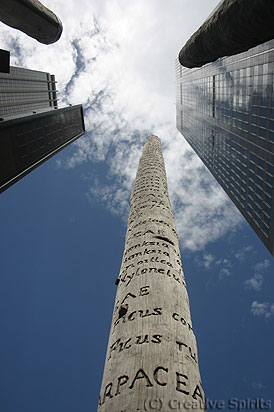 Edge of the Trees sculpture. The wooden pole shows names of Eora people and places.

On level 3 of the Museum of Sydney is “Cadigal Place”, a small one-room exhibition. Large signs tell the stories of some Aboriginal people which had contact with the white invaders, such as Bennelong, Arabanoo and Colebee. Some Aboriginal people talk about their lives and memories in a video. The exhibition shows also traditional cultural items, such as boomerangs and artefacts.

Nearby is the viewing cube where you can sit down, relax or read the explanations to the markings in the museum’s forecourt.

From Circular Quay walk south on Phillip Street for approximately 150 metres until you reach the corner of Phillip and Bridge Streets.

Part adventure, part novel of ideas, part spiritual autobiography, The Songlines is a classic for anyone… 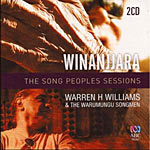