Redfern is a suburb a short drive south of the city centre. It is where many Aboriginal people choose to live. Murals document Aboriginal activity and issues. The political centre is “The Block”, a former railway factory area. 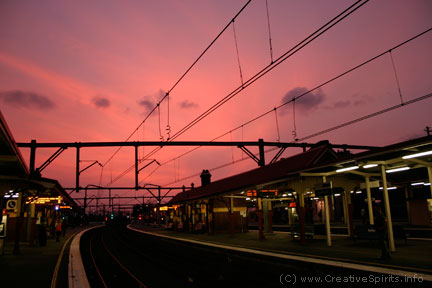 Redfern railway station. There was, and still is, constant migration of Aboriginal people from remote areas to the city and vice-versa.

Redfern was named after surgeon William Redfern who was granted 100 acres of land in 1817 by the Governor of New South Wales, Lachlan Macquarie.

In August 1859, Redfern was proclaimed a municipality of Sydney. Part of the suburb was then a market garden with open-air markets selling produce direct to its citizens. “Heaps of Kooris worked in the markets, the railways, in meatworks and in factories, such as the chocolate factory,” remembers historian Heidi Norman [1]. “There was a real acceptance of Aboriginal people in the workforce.”

There was a mixture of races, with Chinese, English, Aboriginal, Portuguese and other people sharing the suburb, and some of the older buildings are still part of the cityscape today.

Aboriginal people from rural areas migrated to Redfern in greater numbers during the 1920s, lured by work opportunities at the Eveleigh railyards.

Redfern gave birth to Australia’s first Aboriginal-run health, legal and children’s services in the 1970s. In 1972, The Block became a unique project in Aboriginal-run housing and the focal point for the reconciliation movement [3].

In the 1980s the manufacturing sector became increasingly automated, and Redfern changed. Once it was a “haven” and “modern sacred site” for Aboriginal families [2]. But “after decades of being ravaged by poverty and low employment, discrimination, drink, drugs and death, crime, heavy-handed policing, riots, antagonistic politicians and negative media coverage” had turned into “a kind of hell” for some of its residents.

On 10 December 1992, then-Prime Minister Paul Keating made his now historic speech in Redfern Park. For the first time he publicly acknowledged to Aboriginal people that European settlers were responsible for the difficulties Aboriginal communities continued to face: “We committed the murders. We took the children from their mothers. We practiced discrimination and exclusion. It was our ignorance and our prejudice.”

A festival brochure [4] described Redfern as “a place of many stories, of inspirational leaders, fiery rhetoric and activism. It is an urban meeting place for Aboriginal Australians from all over the country.”

“Sometimes besieged, always resilient, at Redfern’s core is its thriving and dynamic community, home to many of Australia’s political and cultural trailblazers.”

“Known to locals as the ‘Black Capital of Australia’, Redfern is home to artists, leaders and citizens who vigorously offer Sydneysiders an alternative history and, potentially, our alternative future.” 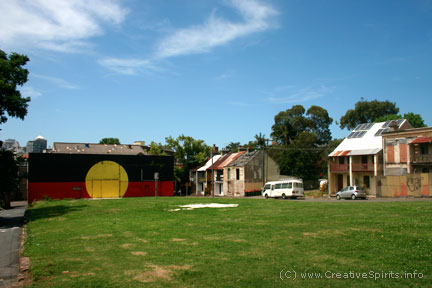 The Block in Redfern with some of the houses earmarked for demolition in the background.

The area the surrounds the Block has been a meeting place for Aboriginal people for “tens of thousands of years” [6]. In more recent times the area was a focal point for the reconciliation movement.

Referring to a time when many residents were stuck in a vicious cycle of drugs, alcohol and violence, the Block was called “The Blockage” [5].

The Aboriginal Housing Company—Australia’s first community housing organisation— is the landlord of many of the Block’s properties, the first urban-based land that Aboriginal people owned in the Sydney CBD. But the AHC had trouble collecting its rent and maintaining the crumbling houses, as it only received little public funding [2].

A mural of the Aboriginal flag on the wall of the Elouera-Tony Mundine Gym has become a de-facto icon for the Block. Tongan-born Alex Tui, a former world champion kickboxer, painted the mural in 2000 to “bring people together and [reaffirm] ownership of [Aboriginal people’s] part of Sydney.” [7]

In early 2010 the last 20 remaining houses on Eveleigh, Vine, Louis and Caroline Streets were demolished to make way for replacement housing, commercial, retail and cultural spaces. This so-called Pemulwuy Project takes its name from the famed Aboriginal warrior.

Because of its significance the Block is regarded by many Aboriginal people as a “modern-day sacred site” [6].

I love The Block, I love being a part of it and Redfern.—Shane Phillips, CEO of the Tribal Warrior Association [2]

Poem by an Aboriginal resident of The Block [8] in the wake of the November 19, 2010 deadline before demolition began in early 2011. Read more Aboriginal poems.

From Sydney’s CBD take any south-bound train. Redfern is the first stop after Central.

Eleven year old Digger J Jones is a terrific character – a feisty little scamp with a lot of personality. His…

Kiss That Boy (7″)
by Sharnee Fenwick

Robbie knows bad things happen in Walgaree. But it’s nothing to do with him. That’s just the way the… 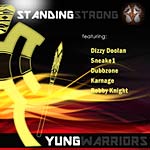