Tank Stream is the hidden reason why Sydney is here and not a few kilometres further north or south. Today, however, almost nothing is even visible of Tank Stream itself.

For over 40,000 years, Aboriginal people selected camp sites for two good reasons: food and water. Excavations in the vicinity of the original course of the stream revealed a high concentration of flake stone artefacts made from water-worn pebbles. So Tank Stream not only provided the Aboriginal people with water and fish, but also with other resources for their daily life.

Captain Arthur Phillip, too, had to select an appropriate camp site for the new settlement which provided a reliable source of water. When he noticed a little stream discharging into the salt water of Sydney Cove he must have sighed with relief. The townsite of Sydney was found. 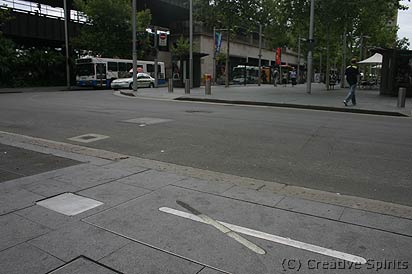 Tank Stream artwork. Looking over Pitt Street northeast. In the foreground the first artwork with the plaque to the left. Alfred Street in the distance where the bus is.

As the settlement grew Phillip realised that he had to protect the stream for the water to remain clean. Everyone caught polluting the stream was eather flogged or had to pay a fine. When a severe drought reduced the stream to a little trickle, three tanks were excavated from the sandstone, giving the stream its present name.

When Phillip left Australia the protection of Tank Stream was dropped and it quickly became polluted. Eventually it turned into an open sewer and became a major source of smell and illness. To protect the settlers, Tank Stream was covered at some places at first, then with the expanding city in its entirety.

Today nothing of Tank Stream itself remains visible on the surface. But it still exists, acting as a storm water pipe system for Sydney.

This walk of approximately one hour takes you along the visible elements which refer to Tank Stream. Are you ready to explore? Let’s go!

Tank Stream walking map. The numbers refer to the points of interest described in the text.

1. Footpath installation I and fountain

In 1999 the artist Lynne Roberts-Goodwin installed six separate sites in the pavements of the city to mark the Tank Stream. The first one is visible on the western side of Pitt Street at the intersection with Alfred Street, south of wharf 1 of Circular Quay. Watch for two long elements in the pavement crossing each other at an angle (see picture top right).

At night the glass modules are supposed to be illuminated with blue light, imitating the flow of water. This, however, does not work anymore. None of the artworks is illuminated anymore except for one.

“Into the head of the cove, on which our establishment is fixed, runs a small stream of fresh water, which serves to divide the adjacent country to a little distance, in the direction of north and south.” (Captain Watkin Tench, 1788)

Don’t miss the fountain which is between Pitt, George and Alfred Streets. Explore the animals and listen to the sound of the moving water before you set off to explore the other traces of Tank Stream.

Walk south along Pitt Street on the western pavement until you reach Bridge Street. The street was named for the wooden footbridge that crossed the Tank Stream. Cross the street, then turn right into Bridge Street and walk a few metres. In the pavement on the southern side of the street is the second artwork, showing a two pairs of elements.

Walk into 17 Bridge Street where you can find 3 more double sets of Tank Stream art installation markers, which are lit up, though not with the original blue lighting. Signs explain them on the inside wall. (Thanks to Tim Richards for this discovery.) 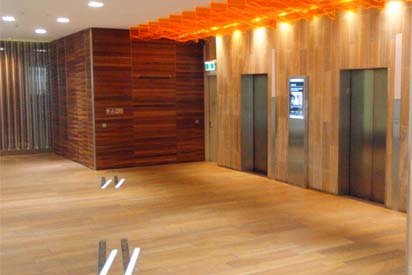 Tank Stream markers inside 17 Bridge Street. Note how they mirror the course of the waterway. Photo: Tim Richards

Join Pitt Street again and walk on south. Cross Bond Street and walk along the next block until you see a small street to your right named Curtin Place. Walk into this street for about 20 metres. On the right there’s a plaque explaining briefly the history of Tank Stream and showing a map of its catchment area and original course. The tanks have been where you crossed Bond Street.

Notice the steps leading to an inconspicuous entry just left of the plaque which looks like a maintenance or supply door. This is where the Tank Stream Tour starts to explore Tank Stream underground. 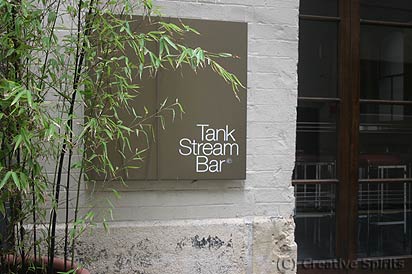 Follow Pitt Street further south until you reach Hunter Street. Cross it, then turn right into Hunter Street and walk for about 50 metres. Here you’ll find the third artwork in the pavement showing one pair of elements almost perpendicular to the footpath.

Margaret submitted the following story regarding this area of Tank Stream:

“The night shift was spooky…”

Because a friend is visiting Sydney and will be staying close to where I worked many, many years ago I asked him to check out ‘Wales House’ which is now the Radisson [Plaza] Hotel on the corner of Pitt and Hunter Streets.

As a part of my job I would go to the basement of the building to collect the work that came in via a fleet of cars to be processed for the Bank.

We had a computer FABACUS but the many branches around Sydney were not connected to it therefore all deposits, withdrawals etc came to ‘Wales House’.

To go to the basement whilst on the night shift was spooky because where the lifts opened there was a steel framework directly opposite the doors and behind the steel framework was the Tank Stream.

The sound of the running water, plus the dankness and dark made it feel quite ominous. In the daytime not so bad but on the nightshift, eerie and creepy.

Hal, a reader of this page, shared a secret:

Thanks for the great information and map about Sydney’s historic Tank Stream. I think your website is the most comprehensive treatment of the topic on the internet.

Last Saturday night, my wife and I were at the City Recital Hall in Angel Place for a concert. We entered from the little alley way off George Street. Right there, in the lower foyer on the western side is another installation not mentioned on your website. I was so excited! And the best part is that this installation is not ruined by over-paving. It still glows as luminously as the artist intended. It really is gorgeous, a real treasure and I hope it remains preserved. — Hal

Thanks, Hal, for submitting this tip which I hope leads other explorers to this site. Note that this site is actually inside the Recital Hall. You have to enter the hall from either entry, then just walk on until you reach the round reception room. 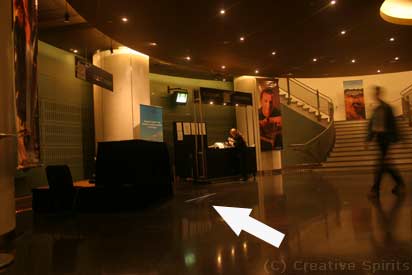 Tank Stream installation at Recital Hall. This is the last surviving working installation as the artist had conceived it. The arrow points to the artwork which is visible as a slim streak of light.

Walk along Pitt Street once more and turn right into Martin Place. In front of the General Post Office (GPO) on the other side of the war memorial you see the next artwork element, consisting of a double pair again.

Enter the GPO building and descend the staircase to the lower floor. Turn left then right again. Behind bar tables is a small permanent exhibition about the Tank Stream. It gives you a detailed history of Tank Stream, a cross-section of the pipe and an exposed part of it which is still in use today, though joined by a modern pipe. You can even study a plan of the GPO’s drains which all led to the Tank Stream.

Walk on until you reach Pitt Street Mall. Where Sydney Arcade joins Pitt Street Mall you can see the last element of the artwork, showing a double pair again and the same plaque which was also installed on the other end near Circular Quay.

If you like, you can walk on into the area between Elizabeth, Pitt, Market and Park Streets. This used to be a swampy ground where the spings which fed Tank Stream were and still are, now hidden by the city concrete.

Now you might want to relax, have a rest in Hyde Park and a drink of fresh water, remembering that Aboriginal people enjoyed this at the very same spot some 250 years ago.

On two rare and very popular occasions during the year, Tank Stream is open for public inspection. The Historic Houses Trust and Sydney Water conduct tours through an 80m segment of the tunnel system.

The tour starts with a video detailing Tank Stream’s history. Then you get gum boots and a hard hat and can climb down into the tunnel. These tours are not without effort. Lighting has to be mounted and fresh air is blown into the cavity to ease breathing. 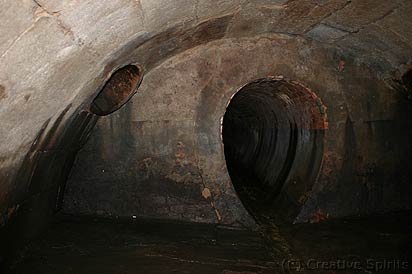 You can see the floor of the stream, which has been built by convict labour. The walls and ceiling is the work of mansions who have left their marks in the stones. If you look carefully you can discover an “M” or a triangle. The section you are walking along is interesting as it shows you three different types of tunnel.

The modern version with a rectangular cross-section of reinforced concrete and two old sections, one build with sandstone slabs, the other of egg-shaped style and much narrower.

Tour lasts for about 45 minutes.

When is the next Tank Stream Tour?

Sydney Living Museums organises the very popular Tank Stream tours twice a year. To manage the high demand they has introduced a ballot system—you need some luck to secure a ticket.

After Tank Stream was polluted, a tunnel was build from swamps south of the settlement, what is now Centennial Park. Due to mismanagement the construction of the tunnel took 10 years to complete. It is known as “Busby’s Bore”, after the manager of the project, Major John Busby. But Busby’s Bore, too, suffered eventually from pollution and was decommissioned in the 1890s after serving as Sydney’s water supply for almost 60 years.

Take a bus or ferry to Circular Quay, then walk west along Alfred Street. The walk starts at the T-crossing of Alfred and Pitt Streets and continues between George and Pitt Streets.

In the 1840s, white settlement in the north was under attack. European settlers were in awe of Aboriginal… 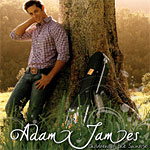 Children of The Sunrise
by Adam James