If you’re ever in Broome, visit this crocodile park - it’s really worth it! You’ll get the “I’m scared”-factor for free observing 5m-crocs basking in the sun which have been caught because they killed a horse…

Some episodes also screened in the The World Around Us series.

Malcolm revealed more details in an interview recorded by Kabel 1 in July 2002 when he visited Germany:

The best reward for my work is the pleasure my films create for viewers—in Australia since almost 30 and in Germany since about 10 years.—Malcolm Douglas

Douglas is a “real character”, with the sort of colourful life many Australians have the courage to lead, not worrying too much about papers and seizing opportunities as they come up.

Stuart Douglas, the younger brother of Malcolm, tells the story of when they grew up in Nauru.

Malcolm had borrowed a spear from the family’s houseboy after promising him he would look after it. However, after an attempt at spearfishing , the spear got lodged in a fish and sank to the bottom.

But he had promised the houseboy the spear would be okay. [1]

I wonder when he's going to get a proper job.—Malcolm's mum about Malcolm [1]

Sadly, Malcolm Douglas passed away on September 22, 2010, when he became pinned between the door of his four-wheel-drive and a tree [1]. He was 69 years old.

This series was produced from 1976 to 1992 with a total of 48 episodes. A video tape edition of the series was never published in the American or German market, but you can order his DVD series.

If a series consists of multiple parts the number is added in brackets.

Because of work commitments and the influence of Christian missions, traditional mourning ceremonies among…

Handful of Sand: The Gurindji Struggle, After the Walk-off

50 years ago, a group of striking Aboriginal stockmen in the remote Northern Territory of Australia heralded… 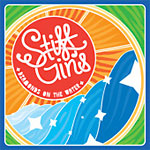 Diamonds On The Water (7”)
by Stiff Gins

Sweet Water - Stolen Land interweaves the destinies of two families, black and white, in this powerful,…