Many a brochure explains why this little island was named “Rottnest”, but few explain the Aboriginal name Wajemup.

It has been suggested to have the meaning “place across the water” and one can understand this name as the island had been connected to the mainland 30,000 years ago. Aboriginal remains date from then. There are some sites on Wajemup which have a special significance to the Aboriginals - not very surprisingly, a sad one.

“Wajemup has a long history of Aboriginal celebration and cultural healing and was used by women and children but has always been known as a men’s healing site,” explains Karen Jacobs, Aboriginal member of the Rottnest Island Authority board [2].

“There’s layers of knowledge that Aboriginal people have about this history,” adds Nyoongar elder Noel Nannup [3]. Visitors to this island should leave with an understanding that “not only was this island a place of hurt, angst, frustration, we also tell them there’s a deeper knowledge than that.”

“The island was believed to be a home of spirits among the local Noongar communities. When the Europeans settled in Western Australia, however, Wajemup acquired a very different significance,” says a leaflet by the Island Authority; however, another leaflet by the same office tells of “a fascinating history as an Aboriginal penal settlement”... To my mind, it’s sad, but not “fascinating”. 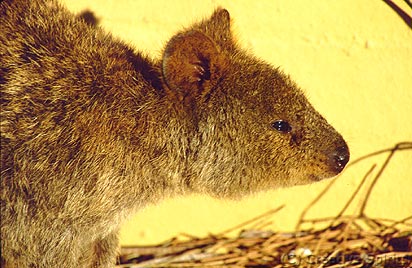 Wajemup. Too cute to give a miss: Quokkas, native to the island. 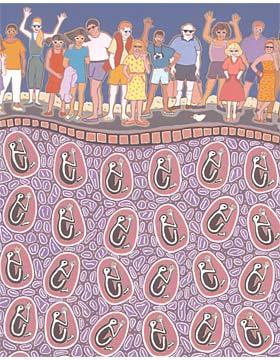 Sally Morgan: Greetings from Rottnest (detail). This artwork from 1988 shows the stereotypical tourist scene (sun, sand and fun) atop the buried bones of Aboriginal people in foetal positions. It shows that for Aboriginal people Rottnest Island is not a place to visit or holiday to enjoy the sun [4].

Originally Aboriginal people were imprisoned in the Round House in Fremantle. When this jail became too small during the 1830s a new location was sought. Rottnest Island was thought suitable because it was separated from the mainland which made escapes not easy.

Beginning in 1838, Aboriginal prisoners were sent to Rottnest Island and “assisted” (Round House leaflet vocabulary) in the building of a prison complex. In fact, most of the historical buildings on Wajemup which you see today have been built with Aboriginal labour. The impressive sea wall alone, which you see upon your arrival, took them three to eight years to complete (sources vary). The prison was closed in 1931.

Before a woman set foot on Rottnest Island she had to do a smoking ceremony which is linked to the many men who died on this island. However, details cannot be provided as this is women’s business and you might be a male reader.

Between 1838 and 1903 more than 4,000 Aboriginal men and boys from all tribal areas of Western Australia were imprisoned here [2]. Many men were leaders and decision-makers, leaving their communities without a vital person of knowledge. Crammed together on the island tensions arose between them.

According to Aboriginal elders, incarceration on Rottnest Island was a double punishment because the island is a place forbidden to them culturally [4].

Many died simply because they were parted from their land, which has a much, much higher significance to Aboriginal people than to whitefellas. The prison, built by Aboriginal labour, was so overcrowded at times that prisoners who were far from the openings through which guards handed the meals, starved.

Ernie Shardlow, a long-term resident and foreman at Rottnest Island, revealed in 1987 to the media the 1962 discovery of 400 Aboriginal people who had been buried in a seated position in mass graves [1]. Workers had been ordered to cover them up to hide them from view.

These prisoners had died from measles, influenza or malnutrition, 5 were hanged. They were buried in unmarked graves.

Not all is history. Western Australia continues to incarcerate Aboriginal Australians, and its Aboriginal prison rates are the worst throughout Australia.

“In my country I know of a waterhole called Coyle’s rockhole, and that was his hideout when he was resisting the settlement into our lands.

“That poor old fella was sentenced here [to Rottnest Island] when he was about 45-years-old and released in his 80s, so he spent something like 40 years in the prison for standing up for his rights and for his people.”

There is a cell on the side of the boatshed which is located on beach-level. It was added to the shed “to facilitate the movement of prisoners to the mainland”. This site is still known to a lot of Aboriginals.

Cottages F and G (see town map of the settlement). I was told by Aboriginal people that the upper storey has been used as a lock-up for Aboriginals as well. Two small windows can be seen there.

The main site surely is the Aboriginal cemetery. I have a Rottnest Island map by the Department of Land Administration, Perth, which dates from 1988 (first edition). Why is this important? Because on this map, the Aboriginal cemetery simply doesn’t exist! The map shows a road where currently the area is fenced off and a sign calls for respect for the cemetery. From 1903 (when the prison was officially closed) to 1984 the cemetery remained unacknowledged! The December 1999 “Welcome to Rottnest Island” brochure shows no “main roads” in that area any more.

In 2007 the Rottnest Island Authority closed a tourist camping area knows as ‘Tentland’ because it was sitting on an Aboriginal burial ground where hundreds and possibly thousands of Aboriginal men are buried [5]. The burial ground is now heritage protected.

The Quod (or “quad”), an octagonal prison, once held as many as 167 Aboriginal prisoners in 28 tiny cells. Most Aboriginal people died here of diseases which took a “terrible toll”.

Between the years 1838 and 1931 more than 370 men and boys died and the Nyoongar still consider Wajemup as sacred ground because of these deaths.

The Quod now serves as an accommodation. It’s called Rottnest Lodge, has a spa, and there are double bunks for children. Little do tourists know about the terrible past of their bedrooms.

But there is hope its history will be acknowledged. The Quod’s commercial hotel lease is earmarked not to be extended beyond 2018. It will then become the centre of an Aboriginal interpretative museum, and a healing place [6].

We estimate that just over 4,000 Aboriginal men, some as young as eight, were taken as prisoners and held in the Quod.—Karen Jacobs, Board member, Rottnest Island Authority [5]

This is the largest Aboriginal deaths in custody site in Australia.—Glen Stasiuk, historian at Murdoch University [6]

One of the best ways to explore the island is by bike, preferably your own. There’s an excellent “Rottnest Island Bicycle Guide” available at the information. It describes two tours, the Lakes Bicycle Trail which covers 15 kms and the Cape Vlamingh Trail which covers 29 kms.

I can definitely recommend the latter one because you’ll get a fairly good overview of the island. Take some water with you (and a small dish to give some to the Quokkas) and plan most of the day for this tour. There’s lots to see!

Where I Belong
by Trevor Adamson

Tracks: An Old Aboriginal Stockman,  Back Where I Belong,  The Desert Rose,  Iritja Tjuta,  It's All Over,  My Finke River…

Blues Across The River
by Yugul