History of the ‘Duyfken’

“What the heck is ‘Duyfken’ and who built a replica of this strange thing?” you might ask. Well, the strange name comes from the Dutch East India Company (VOC - Vereinigde Oostindische Compagnie) which in 1606 made the first historically recorded voyage to Australia. That’s even prior to well-known Captain Cook!

The ship left Banten, Java, in late 1605 and sailed to the Banda Islands (Indonesia). Early 1606 she reached Cape York Peninsula. Hence the first Europeans to set foot on Australian soil were indeed the Dutch Captain Willem Janszoon and his crew.

The Aboriginal people from the Pennefather River (approx. 40 kms NNW of Weipa), where the Duyfken made her landfall, have a tradition about this contact and it concerns a large dove or pigeon. Actually, if you have a close look to a map of the Cape York Peninsula you’ll discover a “Duyfken Point” near the township of Weipa. 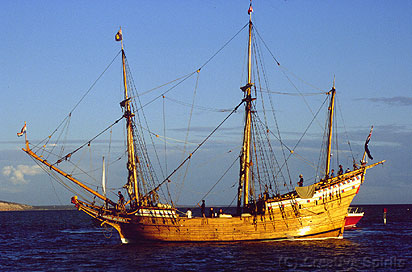 The name Duyfken comes from the Dutch word for “little dove” or “little pigeon” and was a popular name for small fast ships that could work as messengers for a fleet to find new land or explore the waters. Or, ship-technically speaking, “it was better to loose an explorer ship with 20 crew than a cargo ship with 200”.

The replica was built in Fremantle with the aim of building a sailable ship. resources included contemporary artwork, old contracts (which detailed the timbers used), remains of old ships, log books (from which the ship’s performance could be derived), computer modelling and, last but not least, a lot of eye work.

In 2000 the Duyfken retraced most of the original route. She started out on April 8th in Fremantle, sailed as far as Broome, visited Indonesia and Papua New Guinea, returned to Australian waters and concluded its journey in Brisbane, Queensland.

Sing to Glory
by Jimmy Little