What does “stromatolite” mean?

The word stromatolite originates from the Greek words “stroma (stromatos)” which means blanket, and “litos”, rock. This origin emphasises the laminated (layered) nature of this special type of rock, like a pile of blankets.

Stromatolites can be defined as the fossilised remains of a colony or mat of “cyanobacteria”. Cyanobacteria is commonly (and mistakenly) known as “blue-green algae” and relies on photosynthesis to grow. Their size is from 1 to 10µm and their growth rate is estimated at about 0.04 to 1mm per year. 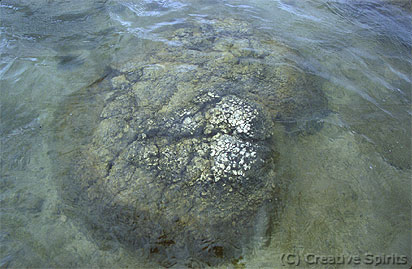 Cervantes. Stromatolite. A stromatolite just below the water. This one's probably still alive.

Those now living are exceptionally tolerant of extreme environments. Some live in hot springs of near boiling water while others live in very salty water like at Lake Thetis. The lake is fed by an underground stream rich in calcium and bicarbonates. Actually, fossilised stromatolites were found prior to living ones, which is very rare in science.

Where can I find stromatolites?

Stromatolites found in Australia are as old as 3.5 billion years. Hence they are the earliest life forms on earth, dating back into the early Archaean era, according to researchers (Nature 441, June 2006).

The living stromatolites of Shark Bay are about 3,000 years old while these at Lake Thetis may be 2,000 years of age. Cervantes. Stromatolite. When a stromatolite dies it resembles an extinct volcano.

The bacteria trap fine sediment with a sticky film of mucus that each cell secretes, then binding the sediment grains together with calcium carbonate which is separated from the water in which they grow. As these colonies of bacteria grow and eventually die, they leave behind a hard material composed of tiny bits of rock and sand that gets trapped in their slimy mats.

The layers of rock under the living mat of bacteria keep increasing as long as the bacteria continue living, reproducing and growing on top of previous populations. However, a necessity for stromatolite growth is the absence of any predator which is generally the case due to the high salinity of the water.

Been Waiting (EP)
by Jessica Mauboy