Two Yorkshiremen in Robert Dale’s exploration party (who “discovered” the district) suggested that the place be named after the northern English town of York. The Aboriginal name is Balladong.

York is the oldest inland town in Western Australia, settled two years after Perth. The National Trust classifies it as York Historic Town, inviting the culturally interested traveller to the many historical walks. York. Initially the Court House was built in 1895 for a small police force which dealt with the convicts.

Aboriginal people believe that at York you can see where the Warkal (water snake) left a track when he came over the hill. York was also the place of the first “official” execution of two Aboriginal men for the pay-back killing of Sarah Cook and her daughter. Their actions, however, were within traditional law, which is becoming increasingly important nowadays in dealing with young Aboriginal offenders to “break the circle of crime.”

A lot of travel guides mention the N’galli Gallery owned and operated by the local Nyoongar Aboriginal people. When I was visiting, however, it was closed and the shop empty.

You can watch the sunset from Mount Brown Lookout which affords views of the township and surrounding countryside. You get there by following South Street north over the Avon River, turning left into Newcastle Street and following this street which does a sharp right turn into Lincoln Street. Now just drive straight ahead. The road soon starts to climb up the hill finally taking you to the lookout.

As the spirits wandered they suddenly realised that they were all going to become real, while they did not know where, or when, or how, or why they began to communicate with each other. They sorted themselves into different groups there were tree spirits, plant spirits, bird spirits, animal spirits, and people spirits.

A great gathering of spirits moved across the land, More and more joined as they moved along. By this time the tree spirits completely dominated, as there were countless billions of them. From their point of dominance the trees stated that they believed that there should be a carer of everything. And so a process of elimination began, the tree spirits said when we become real we will only grow in one place, that means we won’t be able to look after any thing else.

However, that doesn’t stop us from making this pledge, we will provide what ever we can to help who ever wins the right to look after us, and everything else, all we ask is that we are not used until there is none of us left. Once the tree spirits made this pledge they all moved to one side.

My Mob Going to the Beach

A walking trip from the suburbs to the beach. The words and pictures are compiled into an engaging lyrical… 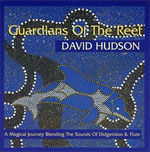 Guardians of the Reef
by David Hudson

A Record in Stone: The Study of Australia’s Flaked Stone Artefacts

A Record in Stone includes a book & CD. It is a comprehensive investigation into the different ways in which…